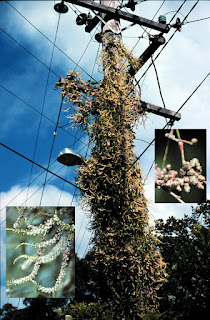 (Anredera cordifolia)
FAMILY: BASELLACEAE
ORIGIN: native to South America
HABIT: glabrous, herbaceous, perennial climber to 40m
HABITAT: fertile soils, disturbed areas, often planted along fences
IDENTIFYING FEATURES: thick, fleshy, alternate, heart shaped leaves. Stems produce aerial tubers. Numerous long flower sprays in Autumn, small, greenish, creamy-white flowers
FRUIT/SEED: usually does not produce seed in Australia, disperses by aerial tubers which fall to the ground
UNDERGROUND STRUCTURE: tap and fibrous roots, roots from tubers
REMOVAL TECHNIQUES: remove as much vegetative material as possible from the site, scrape and paint stems with glyphosate. Requires lots of follow up maintenance to remove tubers and tuberlings from the site
RESPONSE TO DISTURBANCE: re-grows from underground tubers
Description: Madeira vine (Anredera cordifolia) is an extremely vigorous, climbing vine which was introduced from South America as an ornamental plant. The leaves are light green, soft and heart shaped 2-10cm long and 1.5-9cm wide on short stalks. The small, creamy flowers are arranged in a 10-25cm spike resembling a lamb’s tail. Flowering extends from October through to April.
Reproduction: Plants reproduce by vegetative means, however there is evidence that some populations of Madeira vine occasionally produce viable seed. A single plant can produce thousands of light brown to green small potato-like tubers which sprout from the stem in clusters. These grow larger and production is heavier in humid or wet weather. Mature aerial tubers drop off the plant and either sprout into tuberlings immediately or remain dormant in the soil for up to five years. The plant will also propagate itself from a leaf or any piece of stem so it is essential that all parts of the plant are removed from the site and bagged for at least two months. It is also possible that birds spread the aerial tubers as King Parrots have been observed feeding on them.
Distribution: Madeira Vine occurs in coastal regions from Cairns in Northern Queensland to south of Wollongong on the NSW South Coast. The preferred habitat is alongside rivers and creek lines.
Problem: Madeira Vine represents a major threat to native plant communities, especially remnant rainforests. It is able to grow more than a metre per week in ideal conditions so it easily outcompetes native species, eventually smothering and destroying the native forest canopy.
Control: Carefully scrape a 20cm section of the stem to expose the cambium, then paint with undiluted glyphosate. This will kill the root system and foliage, however the aerial tubers remain viable for up to five years so eradication requires long term, follow up maintenance. Alternatively, vines may be injected using a pressurised syringe with a few cc of glyphosate at 50%. This allows transfer of the herbicide into the aerial tubers and has proved successful in most cases.
For non-chemical control, remove all parts of the plant from the site, including underground and aerial tubers. Remember that the plant will regrow from any part of the stem, leaf or tuber. This material should be bagged in a non-degradable bag and left for at least two months to allow total decomposition prior to disposal. This plant grows more vigorously in sunny conditions. Tuberling growth is inhibited in dense shade, so re-establishment of the canopy aids in the control of this species.
A Case Study: Madeira Vine infestation at Coonong Creek Bushland, Gymea.
The eradication program conducted by Ruth Graddon commenced in 1993 and has successfully reduced Madeira Vine from a large infestation to an occasional and controllable re-shooting. Several techniques were trialed including stem scrape, leaf feed (using 2% glyphosate), and cut and feed. The cut and feed technique was the most successful. This involved ‘feeding’ the upper part of the vine with herbicide and digging out the in-ground tubers. The steps included
tying a cluster of vine stems together
placing a plastic cup in an old kneehigh sock
cutting the vines below the tie
plunging the vines into the cup which contained a 5% glyophosate solution
fixing the sock securely to the vine, either by suspending or supporting if necessary
returning 1-2 months later to examine result
In all cases the vine was totally defoliated and shrivelled, including the blackened aerial tubers.

Help us to eradicate this highly invasive weed now!