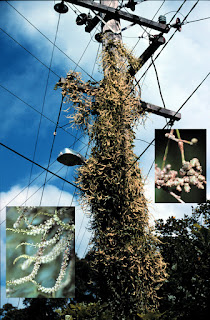 Madeira vine (also called lamb’s tail) is an invasive vine from South America. Originally it was introduced to Australia as an ornamental plant in gardens. It is no longer planted but people in older gardens could still have it growing over sheds or along fence-lines. It has become an environmental weed, locally and Australia-wide, blanketing and smothering both shrubs and trees. Once it is in flower it is very obvious throughout Helensburgh and surrounding areas. It is listed as a Weed of National Significance. 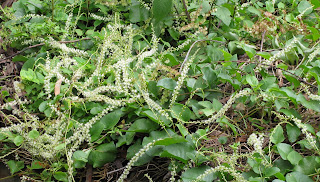 Madeira vine is a twining vine with wide, fleshy, heart-shaped leaves that are 2 to 15 cm long, with fragrant, cream-coloured flower spikes up to 30 cm long in March/April. As stems mature they develop aerial tubers which can become very large.

Dispersal: Madeira vine spreads via the aerial tubers which drop to the ground and form new plants, and also by root tubers. These tubers can be washed down creeks and drainage lines during heavy rain. The tubers can be viable for many years. The vine may also be spread in Council green waste, or dumping of garden waste in bushland.

Removal: Large vines which are smothering trees may need herbicide treatment. Pulling at the vines means that the aerial tubers drop on the ground. Smaller plants can be hand removed. All tubers and tuberous roots need to be removed. All parts of Madeira vine should be put in your red bin. Alternatively, put it in a black plastic bag and leave in the sun for some months, depending on the season. For treatment with herbicide, the 'stem-scrape' method is best. This method is also called bark-stripping or stem-painting. Stem-scraping is used for plants and vines with aerial tubers, or where underground tubers and roots are in a difficult-to-get-to place. A sharp knife is used to scrape a very thin layer of bark from a 15–30 cm section of the stem. Herbicide is then immediately applied to the exposed area soft underlying green tissue. 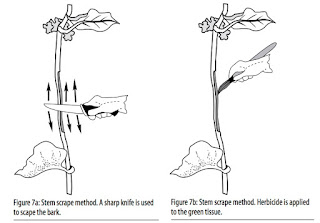 Wonga vine, Pandorea pandorana
This local native vine can easily cover a fence or trellis. It has cream flowers with brown or purple streaks, although yellow and white flowered cultivars are available.