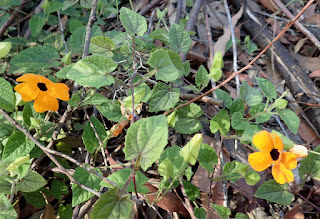 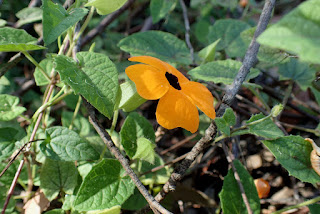 Black-eyed Susan is a native to tropical and southern Africa. It was grown widely as a garden climber, but has, unfortunately, become an environmental weed in the coastal districts of eastern Australia and south-western Western Australia. It is also a weed overseas in southern USA, Papua New Guinea and on several Pacific islands.

Black-eyed Susan is a long-lived vine growing up to 5 metres, and spreading along the ground. It has opposite leaves which are heart shaped, and often finely hairy. It has singular orange or yellow flowers with a black centre, and flowers in the spring and summer. It has a tap root and fibrous roots, and will actively seek and block water/septic pipes.

This species reproduces by seed, and vegetatively by fragments of stems and roots. Seeds and plant fragments can be spread in dumped garden waste. They can also be spread by water and vehicles. It can smother shrubs and groundcover in moist bushland.

Remove by pulling out at the roots. Vines remaining in vegetation can be left to die. Watch for new seedlings, and remove as they appear.

This local vine has bright green leaves with large yellow flowers. This is a vigorous climber or scrambler which grows to 2 to 5m wide or high

This is a vigorous Australian native twining plant. A number of selected colour forms of this species have been brought into cultivation, the most common is 'Snowbells' with pure white flowers and 'Golden Showers' with yellow-bronze flowers.