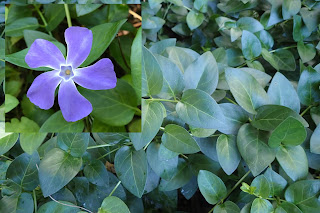 Blue periwinkle is an example of a garden plant that has ‘jumped the garden fence’. It is now considered an invasive species, not just in wetter areas of Australia, but in New Zealand and North America (USA and Canada).

It is a trailing herb with a woody crown and runners up to 1 m long. The stems sometimes develop roots where they come into contact with the soil, and creeping underground stems are also produced. It has blue to purple tubular flowers (3-6 cm across) which are usually borne singly in the upper leaf forks.

Blue periwinkle’s broad-leaved runners form a dense mat, shading out native plants and competing for moisture and nutrients. Its growth is particularly vigorous in riparian and other moist habitats.

It is spread into bushland mostly by dumping of garden waste, but can also spread by broken stem bits being washed into a new area. It occasionally spreads by seed.

Digging every little bit out is the most effective way of removing it. Follow up will be required for some time. 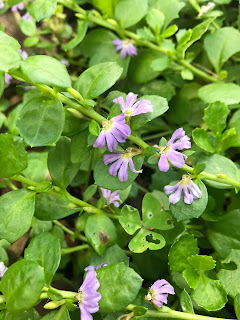 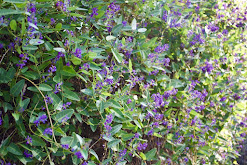 Hardenbergia violacea, Native sarsaparilla: The pea shape flowers appear in winter and spring and are usually violet in colour. 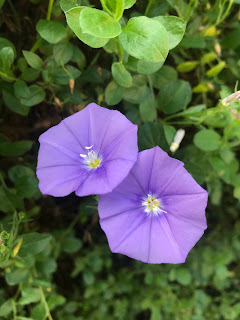 Convolvulus sabatius, Moroccan glory vine: An attractive evergreen perennial with a spreading prostrate habit with blue to violet flowers.
Posted by HelensburghLandcare at 19:15